Q & A with Drew Taylor and Larry Weinstein 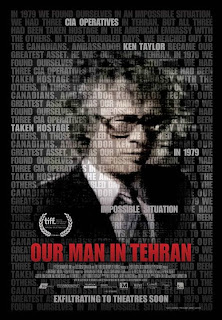 It was about this time last year that The Bookshelf was showing Ben Affleck's Argo. The film--which won Best Picture at the Oscar's that year--dramatized The Canadian Caper, in which the our government collaborated with the CIA to rescue six American diplomats not taken hostage when the United States embassy was occupied by Iranian students and militants supporting the Iranian Revolution. The high-stakes ruse, which involved the fake production of a sci-fi movie, was perfect for a Hollywood retelling. However, as much as our audiences here loved the film, some of the historical inaccuracies put a stone in a lot of peoples' shoes.

A year later, we're very pleased to be showing Our Man in Tehran, a documentary by Drew Taylor and Larry Weinstein. On December 8th at 3:30 and 6:00 both Mr. Taylor and Mr. Weinstein will be in attendance to talk about the doc and answer your questions. As a primer, the filmmakers did us a solid of fielding a few grounders.

The Bookshelf  I wonder why, after the popularity of Argo, you felt the need to make Our Man in Tehran--does it get it that wrong?

Larry Weinstein  It's not that Argo got it wrong or right. It's a Hollywood film and a brilliant one at that. And perhaps it should have said "Loosely based on a True Story," or as I like to say, "Inspired by a True Story." We just believed that there were a lot of details that were not known to the public and we were betting that these facts (I don't want to give away too much) would be very appealing to an audience. You know, at the Premiere of the film at this year's TIFF the former PM Joe Clark said something that really resonated. He said, "I have seen Argo and I have seen Our Man in Tehran and the truth is a better story!"

BS  A certain sort of humbleness is stained into the cloth of our national character, but when our story is gotten wrong, or we're not given our full due, we're not shy about letting people know. What's the importance of "getting it right?" Is there an added pressure to not only get the facts straight, but to articulate what this story means to Canadians?

Drew Taylor  I think the initial response to Argo in Canada showed that we do have a sense of National pride. For those that knew the story, and knew the risks Ken Taylor, John Sheardown, Joe Clark, and many others took to ensure the safety of our American friends, offense was taken when it was minimized in Argo. The greatest disappointment came from specific lines in the script that countered how the Canadians responded; for instance, CIA agents discussing the need to act quickly because “the Canadians were getting cold feet.” When you approach any historical story in a documentary there is a great deal of importance to get the facts straight. But in film, it is impossible to tell the whole truth. However, I do think we made more of a concerted effort than "the other film."

BS  There was a lot of controversy surrounding "the other film," not just the treatment (or lack) of the Canadian story, but the Iranian context. Our Man in Tehran seems markedly different in those regards, could you talk about that?

LW  It's true that the Canadian participation is poorly represented in Argo and we have rectified that in our film. But we also wanted to give the events portrayed in our film a context and that meant delving fairly substantially into the Revolution - an understanding of the Shah, of Khomeini. Nothing is black & white, there are doses of benevolence and malevolence in those regimes. And there is the strange serendipity of history--imagine students who stage a hostage taking that was likely meant to last a day or two and how it was exploited and lasted 444 days.

BS  But the film seems to tell the American story as well.

LW  Yes, we knew that the American response to the crisis was key to the human drama. The more one knows of Jimmy Carter's role in all of this, the more one feels empathy for his personal torment and the toll it took upon his presidency. We didn't interview him but he is ever-present, as you see.

BS  I'm sorry to put this too much in the context of Affleck, but I imagine that's a difficult shadow to get out of just now. When did you begin work on this project? And at what point did you become aware that the story was also being Affleck-ized? Did the splash that that film made affect your own approach to presenting your film?

DT  Our Executive Producer Elena Semikina met Ken Taylor in July of 2012. She immediately recognised during their conversation that some of the details Ken was sharing were not common knowledge. Plans began to develop a feature documentary. At that time it was known that Argo was to be released that fall, but it was interesting that Ken had not been contacted during Argo’s development or production. Having played such an enormous role in the planning and execution of the exfiltration, we would have thought the story impossible to tell without his involvement. It was apparent that Argo would be, at the very least, focusing on the CIA aspect to the operation. Our film was already in development when Argo was released, but once we saw it, it did create a sense of urgency to get our film out. Not as an answer to Argo, but to compliment it, and provide a more complete story that included both the Canadian and Iranian perspectives along with the American one.


BS  There must be some pros and cons to that association. Maybe you could share a few?

DT  Well, when Argo premiered at the Toronto International Film Festival in 2012, there was a worry that if the film covered the Canadian contributions well, then essentially our idea would be a mute point. Luckily, those fears dissipated when we saw the film and our suspicions were confirmed--the Canadian component was mostly ignored.
BS  Is there any worry that your film will be seen as a vehicle for correction, as opposed to an autonomous look at a period of Canadian and World History?

DT  We set out to make a stand-alone film. Not to compete with Argo or even correct it, but to provide an alternative for those who were interested in a documentary. Many of the interviews were conducted just after Argo had released, so we were constantly having to tell people not to reference Ben Affleck’s film. I think it is inevitable, we will be tied to Argo in some way, but hopefully when the dust settles and a new crop of blockbuster Hollywood films have come and gone, the next generation of young Canadians will be able to turn to Our Man In Tehran for a piece of Canadian history.

BS  The film is presented in the first person, as opposed to the more common third person--or, narrated--means of telling a story. Why did you choose that approach?

LW  I've always been uneasy with third-person narration--with "the voice of God" as it were….  I mean in the 30 or so films I've made there's probably a total of ten lines of narration. I feel that narration distances the viewer from the subject--makes it too historical and removed. What was exciting for us was having access to all these people who were at the centre of the tornado of the Iranian hostage crisis of 1979/1980 - the diplomats, the journalists, the politicians, the CIA agents - and hearing their account in first person was something very powerful, something very immediate. It seems as if they're speaking of something that happened weeks ago and not a third of a century ago.  They really opened up for us and I think the audience senses that.

BS  I'm curious how audiences respond to your film in relation to "the other movie," as you put it. Have there been striking comparisons?

LW  At one screening, one of the audience members said something that was very striking to me and kind of ironic. She said, "the thing with Argo was that you knew it was a Hollywood film with all the trimmings - it was designed to put you on the edge of your seat and it accomplished that to some extent but at the same time you knew that there would be a happy ending - that's Hollywood. With Our Man in Tehran there were so many unfamiliar twists and turns that I didn't know where we were going to end up. So I was much more on the edge of my seat with the documentary!" I love that. I think that by virtue of reality being less predictable than fiction or dramatization there is a more nervous reaction to our film. And that's a great argument for documentary treatment of great stories.

BS  Our Man in Tehran is a two-hander. One of you had never directed before and the other has a filmography of 30 films. How did that work?  How did you divide directing duties?  Are you still speaking?

LW  Drew and I have become great friends and are constantly talking about film ideas - ideas that we are doing apart, but also ideas that would be great to collaborate on. I think that says volumes about our "partnership" on Our Man. The collaboration worked well. Drew had a jumpstart on the material and approached me after the initial idea was there, so he headed most of the interviews while I kind of worked out some of the aesthetic approach. But after a few weeks the roles blended. It really was a true and rather pure collaboration. And our Q &A's have been hysterical. It's as if we've been friends for 30 years... Of course, Drew was only a year old 30 years ago - I was already directing films, but no matter.  It's been a great journey and I hope it's the beginning of a great adventure (to quote the great Lou Reed).
Posted by Bookshelf Blogs at 7:13 AM