"Her:" Lesser Versions of What I've Already Felt 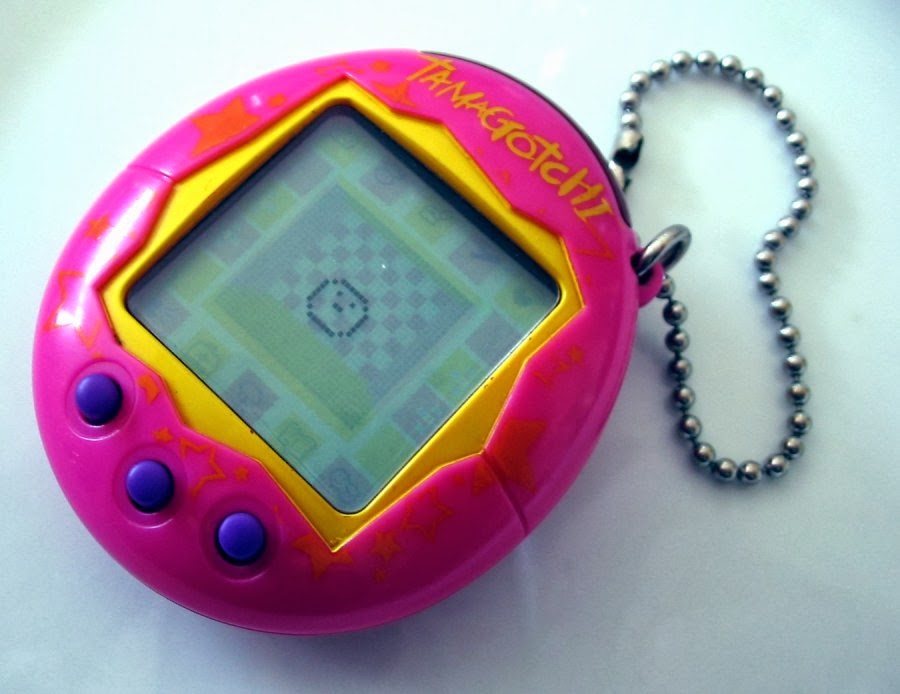 When I was in junior high (circa 1996) these handheld digital pets called Tamagotchi were everywhere. I guess the gizmo could be considered a game, where the goal was to keep your creature healthy and happy and disciplined; if you were a deadbeat, the thing could die. A heap of kids at my school—maybe those who still hadn't stretched over that pubertal gap?—obsessed over the gadget, treated the 8 bit pet as though it was real, would talk to it, got grief for feeding it during class. Teachers would confiscate them until it became obvious that the resulting freak out wasn't worth the hassle. It so happened that the kid in the school who was most unabashedly and troublingly devoted to his Tamagotchi had his stolen. The possibility that he lost it never came up. If his pet was abducted on Monday, his hysterics reached a fever pitch on Friday, when someone in administration gave him a slot in the morning announcements to make a blubbering, gulping plea to have his pet returned. Or, if not returned, he begged that it be cared for. "Don't let it die!" I remember the kid squealing—or something of the like—and I'm sure every single pre-teen in every single class cried just a bit with laughter.

But it occurs to me now, after watching Her and recalling the abduction of what's-his-name's robin egg-sized pet nearly twenty years ago, that that kid—whether nuts or not—must have felt legitimate love for his computer chip, and so felt honest worry, and fear, and bereavement. How do we parse true love from situational or delusional love? I guess this is one of the questions on simmer throughout Spike Jonze's fourth feature.

Her is set in a vaguely distant future where everyone wears hiked-up slacks and are incessantly talking to someone who isn't beside them. Theodore Twombly composes personalized letters for BeautifulHandWrittenLetters.com and lives alone in an apartment that he's seemingly given up on unpacking. Twombly's an awkward guy—increasingly Joaquin Phoenix's bailiwick—in an emotional morass following a split from his wife. He's been dallying with the divorce papers. Seeing an ad for OS1—"an intuitive entity that listens to you, understands you, and knows you"—Twombly signs up. (Anyone doubting the guy's motivations would do well to pay attention to his indifferent answer to whether he'd like a male or female voice: "Female, I guess.") The voice he gets is the hoarse Kathleen Turner model (voiced by the Scarlett Johansson model). It names itself Samantha and I don't think I'm ruining anything by fast-forwarding through how they become friends, and how Theodore feels understood by this artificial intelligence like never before, and how both he and those around him come to question the legitimacy of loving an incorporeal, self-generating entity.

Consider Twombley's job. In Her's future—and more and more in our present—handwritten letters have gone from something banal to something romantic, antiquated. Sharing them is something we mostly go out of our way to do now and, in the future, something we hire a writer to do for us. They are expressions of history, of the history of how people were in love, more than they are an outpouring of something interior and unique. Ultimately—and this is more a comment on language and mores than it's cynicism—how we express our love to the person we love, and the way we display love for a social audience, is mostly a mélange of inherited conventions.

Unpacking his post-split malaise, Theodore confesses to Samantha his want to feel something new, but this isn't a life lust that leads to skydiving or eating/praying/loving . "Sometimes." he says, "I think I have felt everything I'm ever gonna feel. And from here on out, I'm not gonna feel anything new. Just lesser versions of what I've already felt." This issue for Theodore is not what he does, but how he experiences it.

And so the question that nags Her is is Theodore running from the stale, or running towards the sui generis? Is he avoiding the rote pitfalls of a conventional relationship, or is he recalibrating his ability to love and be loved without the scaffolding of convention?

Since Being John Malkovich, Jonze's films have concerned men struggling to love or be loved, with their own minds/attitudes as the major impediment. Her's Samantha is the perfect antidote: she ostensibly loves Theodore for who he is and, in some way, is allowed to do because of her lack of actual experience and her breadth of context. She’s feeling in that pure, unfettered way that Theodore longs to because, really, Theodore is Samantha’s first love, whatever Samantha is. She has the idea of conventions, but not the experience. The major shift in Jonze’s theme is that the love is easy, and that’s why it’s so hard.

It's left up to you to decide what the worth of that core love is if it's not orbited by recognizable conventions. I think of the right-wing attempt to devalue same-sex love by implying that if we start monkeying with the "accepted" expression of love we'll leave open a door that will allow people to start marrying their dogs or their lawnmowers. But the fact remains that there are people who are in love with their dog or landscaping gear, and I'm sure that they'd say that their love is as cogent as the love shared between a man and a man, or a man and a woman. And I don't know how to make a decision about this, as Her doesn't either, when I consider that the love and fear expressed by that squirt missing his Tamagotchi remains one of the most powerful, not self-conscious expression of feeling that I've encountered. More telling than anything, I think, was that this kid was not solely concerned with having his object returned to him, but that his presiding worry was that something terrible would happen to it. Go get your Bible, because I'm pretty sure that test of true love is in there somewhere.
The best resolution I can muster comes from one of the most human, softest, least neurotic moments of Jonze's second feature Adaptation (written by Charlie Kaufman) finds a pair of balding, overweight Nicholas Cage's hiding from an orchid thief. Introverted twin Charlie recalls seeing his extroverted brother Donald being mocked behind his back by a girl he was in love with. "I knew," Donald says. "I heard them."

"How come you looked so happy?" Charlie asks.

"I loved Sarah, Charles. It was mine, that love. I owned it. Even Sarah didn't have the right to take it away. I can love whoever I want."

Charlie objects. "But she thought you were pathetic."

"That was her business, not mine. You are what you love, not what loves you."
Andrew Hood is the author of the short story collection Pardon Our Monsters and The Cloaca.
Posted by Bookshelf Blogs at 12:00 PM