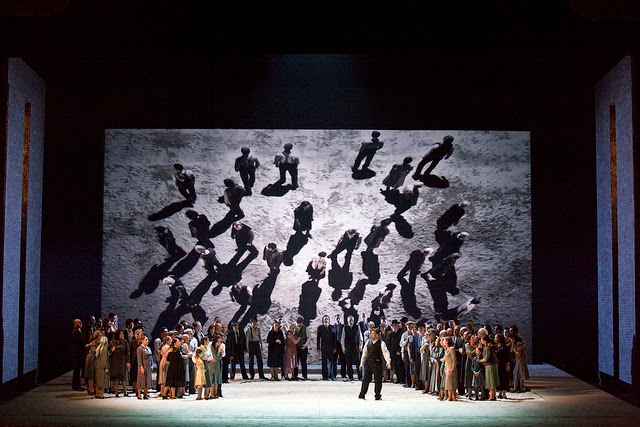 Nabucco was only Verdi's third opera, but became one of his biggest, most lasting successes. It seems he was pressed to consider the subject by Merelli, the Scala's director circa 1840. Various stories about the opera became legend, especially the one that Verdi convinced himself to compose the music when he accidentally saw the words to the Chorus of Hebrew Slaves fall open in the libretto he was given. It now seems more likely that enthusiasm for this chorus was generated by the audience reaction when they saw the metaphoric link between their suppressed national identity under the Austrian Hapsburg rule, and the subjugated Hebrews under the foreign domination of the Babylonians under Nebuchadnezzar their king portrayed onstage. The king's name is shortened to Nabucco to make it more wieldly.

King Nabucco, has two daughters: Abigaile, the star soprano, and Fenena, an alto part. At war with the Babylonians, the Jews have captured Fenena, who had fallen in love with the nephew of the Jewish king, Ismaele—the tenor. Nabucco, with Abigaile and some disguised soldiers, stealthily enters the Temple at Jerusalem. When Fenena admits her love for Ismaele, the Babylonians destroy the Temple. And since this affair between Ismaele and Fenena has allowed this destruction, the Jewish high priest Zaccharia curses Ismaele as a traitor.

In Act 2, at Babylon, Nabucco puts Fenena in charge of the Hebrews as Abigaile finds evidence that she is of slave birth and bewails the fact Nabucco has kept her out of the fighting. The High Priest of Baal tells Abigaile that Fenena has released the Hebrew prisoners, and that he wants her to rule Babylon, spreading the lie that Nabucco has been killed. Abigaile sings of her own ambition to rule. Zaccharia, now captive in Babylon, discovers Fenena's conversion to Judaism, and prevents reprisals of the Jews against Ismaile.

Abdallo, a solider, announces Nabucco's death and Abigaile's plans to seize power. As Abigaile enters and demands the Babylonian crown from Fenena, Nabucco appears and declares himself not only king, but god. Fenena sides within the Jews, which incenses her father further. In a crash of thunder he is punished for his hubris and is driven mad and Abigaile seizes the crown.

In Act 3, the now raving Nabucco sees Fenena consigned to death, and prays to Jehovah to save his only daughter, whose death warrant he has been tricked by Abigaile to sign. He challenges Abigaile with being only a slave, but Abigaile has the only corroborating document and destroys it. Nabucco is helpless to save Fenena. Abigaile is unrelenting. The famous scene follows with the Chorus of the Hebrew Slaves. Zaccharia consoles them that Yahweh will help them.

In the final Act, Nabucco is still mad, but promises to follow the Jewish god if Fenena is to be saved somehow. He will restore the Jewish temple and convert to Judaism. He is miraculously restored, and freed by Abdallo, and plans to go to save Fenena. Nabucco discovers his daughter preparing to die, but he rushes in to save her and then orders the destruction of Baal, which is preempted when the idol shatters. Nabucco frees the Israelites, and Zaccharias hails Nabucco as true king and divine servant of Jehovah. Abigaile enters in remorse. She has poisoned herself and begs forgiveness of Fenena, begs for divine mercy and dies.

I suspect Verdi had his initial difficulties with the complex plot because the dramatic developments, especially later in the piece, show the actions of the deity in miraculous events, such as the restoration of Nabucco's sanity—if not already in its being removed in the first place—and the destruction of the idol of Baal at the end of the opera. In few other places in Verdi do we see the direct influence of any active deity like this. The gods, or God, is mostly a mute figure, passionately addressed or prayed to, but is never elsewhere represented as being responsive, except in ironic plot twists, that rather serve to undermine any assurance that there is a god there. Verdi was himself a religious skeptic, but obscured this mind-set from his public for obvious reasons.

There are few pieces of music so enmeshed with a national political movement vying for the formation of a nation as this opera. The Risorgimento, the movement to establish Italy as a sovereign nation, eventually took up the chorus of Hebrew Slaves as its official anthem, and the opera was made especially famous throughout the years during which Italy achieved its nationhood.

As usual, personal passion is inextricably tied up with politics and public life in a mixture that is to become ever more familiar in Verdi's operas.

The production on show here has already garnered much attention and praise since its premiere to simultaneous worldwide cinema presentation in the debut season of this format in April 2013. Although it is still an early work, the politico-historical significance of this piece has always served it to remain relatively current in opera productions since its debut.

Michael Doleschell keeps mostly to non-fiction, and is deeply devoted to music and culture and never tires of history, and is fascinated by science and the scientific method [as long as they are well explained]. He broadcasts a program of Classical Music for 3 hours every Saturday afternoon from noon till 3 on the U of G's Radio Station: CFRU.
Posted by Bookshelf Blogs at 7:46 PM