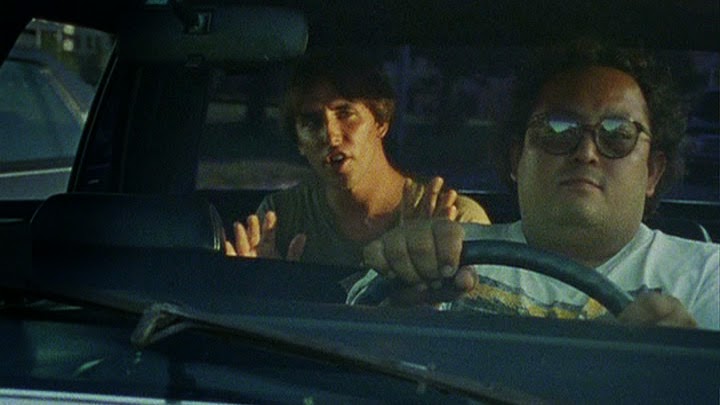 "'Generation X' is now a cliché, but then the whole notion that there was some other group, some other way of perceiving the world that was different from Michael Douglas's baby boom, or Jane Fonda's baby boom - it was heretical. To a certain tiny bunkered group of boomers, it still is."
Douglas Coupland, Wired interview with Richard Linklater, 1994

It's fitting that in Richard Linklater's first movie, a short documentary of the '85 Austin Woodshock Festival, the director runs into Daniel Johnston. A skinny, lisping Johnston holds up his "old new album" Hi, How Are You? and makes Linklater promise that he'll listen to it. Apparently recorded while Johnston was having a nervous breakdown, that album, and Johnston himself, eventually became a touchstone of the underground, DIY, outsider movement of 80s North America. The spool clunk of the boombox he was recording on is audible throughout, the tape hisses like a leaking tire, and Johnston's playing and singing lives on the cusp of unlistenable. But if you give yourself a chance to acclimate, to listen past the technical "flaws" you do achieve an access to the grandiose tunes that Johnston's hearing in his own difficult head.


With the rise in lo-fi and DIY, music--and whatever kind of art--could now be made by kids with limited means, limited talent, but limitless spirit. This lo-fi wave that grew out of and became braided with the hardcore scene was made available to the popular culture when Nirvana put out that "naked baby" album of theirs in 1991. We could argue about Kurt Cobain's prowess as a songwriter until the hipsters come home, but I think Cobain's importance as a music fan can't be understated. As a emissary for the underground, Cobain elucidated the darker corners of American music--whether or not you wanted to further explore those corners was your call. As good an example of any of this--and we can also cite Nirvana's covers of Vaseline and Meat Puppets--was the exposure Cobain gave to Daniel Johnston by wearing a Hi, How Are You? shirt everywhere during the highest heights of his popularity.

Nevermind came out in September 1991, Canadian author Douglas Coupland's novel Generation X had come out March of that year, and, smack in the middle, Richard Linklater's Slacker was released that summer. If you're a high school student writing a paper on "Generation X," this trio is probably the best source material. Coupland and Linklater's work managed to stay fairly underground, but the explosion of Nirvana brought the underground aboveground, and it didn't take long for a generation, for a type of person sporting a type of worldview or fashion-less fashion, to turn into a cliché or a brand.


"It was kinda sad to see slacker, the word, as it broke into the national mainstream, become kind of a negative," says Linklater in the film's Criterion Collection commentary. "Because I always saw it very positively. I always thought to be a slacker would be a badge of honour. It meant you weren't beatnik, or hippie--I never saw those as negative, either. But maybe that's me. Other people saw those as negative as well, to mean bummer, or loser-type people. But to me that was always kind of heroic if you were doing your own thing and living a life of purpose and passion and working on your own thing and not really selling out to commercial interests in your life. You felt good about how you spent your time and you didn't feel your life was too compromised. That that would be a worthwhile, successful way to live. To depict that, I thought would be a positive thing."

Slacker captures a type of living, thinking, talking, and making before that lifestyle became stereotypical, or romanticised, or derided. Acted largely by Austin musicians and artists, it's a kind of document of a collaborative artistic community pre-"Seattle," and pre-a time when everyone was eager to find "the next Seattle." Like the DIY, lo-fi movement in music, Linklater's film is scrappy, sometimes awkward, but genuine and unfettered in its interest in life machinations. Whether your see heroism in that is your call