Head to the Cinema and Travel the World 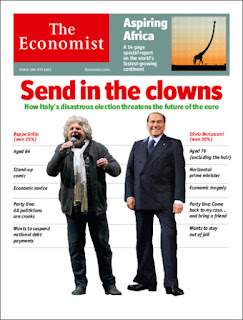 Scanning the magazine racks the other day, I was struck by the cover of The Economist magazine loudly (in print, mind you) proclaiming "Send in the Clowns" and featuring photos of Beppe Grillo and Silvio Berlusconi. It has been decades since I've visited Italy, but it got me wondering just how bad or good things are over there. Heck, they don't even have a big guy in the Vatican right now.

And with no travel plans on the horizon, or in the budget, this makes for a timely presentation of Italy: Love it or Leave it (March 12-14), wherein Luca Ragazzi and Gustav Hofer spend six months touring "the boot." Their film is a colourful and engaging travelogue indeed.

But, looking at the rest of the March film program, I realized that the cinematic voyaging  doesn't stop with Italy. This month we're offering trips to Paris (Hugo, Amour), India and Thailand (Life of Pi, The Impossible), Cold War East Germany (Barbara), Iceland, Alaska, and the polar ice cap (Chasing Ice), Japan (the graphic novel world of Tatsumi), and heck, we've even got some time travel ahead (or behind) of us (Back to the Future).

Look at it like a budget vacation or an entertaining stay-cation where you can forget your boarding pass and leave your passport in the drawer. Just toss a little cash in your pocket or purse and join us for some foreign excursions.

Posted by Bookshelf Blogs at 9:01 AM