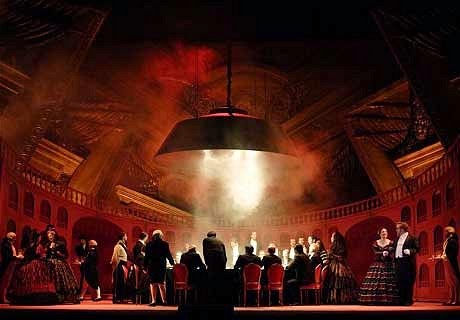 La Traviata is, above all, a very 'proper' opera by conservative bourgeoisie standards, even though it's central subject was still seen at the time of the premiere in 1853, as quite provocative: the tragedy of "the Fallen Woman,” which is the literal meaning of "la Traviata.”

The central plot of most human drama concerns mate selection: a happy match results in the comedy of celebration, an impediment results in the tragic death of one or both of the hopeful pair, or at least their permanent estrangement because of the impediment. The impediment here, is already present in the very title.

We have the urban middle-class version of the untouchable woman, who drags into disgrace whoever touches her, according to the misogynic slant of those mores. The worst real-life nightmare of any proper father with bourgeois pretensions was that his son could get mixed up in any way with such a person.

Going into the theatre at the premiere, everyone had the needed information to infer the plot of this opera.

The simplicity of the dramatic situation draws into question and isolates the whole impediment of 'social propriety' a question that could be raised, especially then, only by begging it without spelling it out. In Hernani, Verdi has his characters convoluting the plot into pretzels over the concept of 'honour', which is meant to expose it's absurdity. La Traviata is, above all, about the emotional costs of maintaining the bourgeois status-quo.

La Traviata is the most realistic and natural of all of Verdi's operas. He seems to be trying out 'Verismo' values, which were not to become a movement until the next generation of composers like Puccini and Mascagni: real people in real situations. Verdi in fact suspends his entire usual arsenal of opera-dramatic conventions: no curses, no revenges, poisons, lese-majeste, or blood-oaths. None of Verdi's other operas have such an even temper, and although there are a few public confrontations, Alfredo just throws his gambling winnings at Violetta to humiliate her, the worst thing that happens is the death, by natural causes, of the protagonist. This throws into highest relief the emotional, class, and family values that are dramatically brought to bear on this situation. It takes no flights of fancy to commiserate with the very real conflicts that the characters are living through. 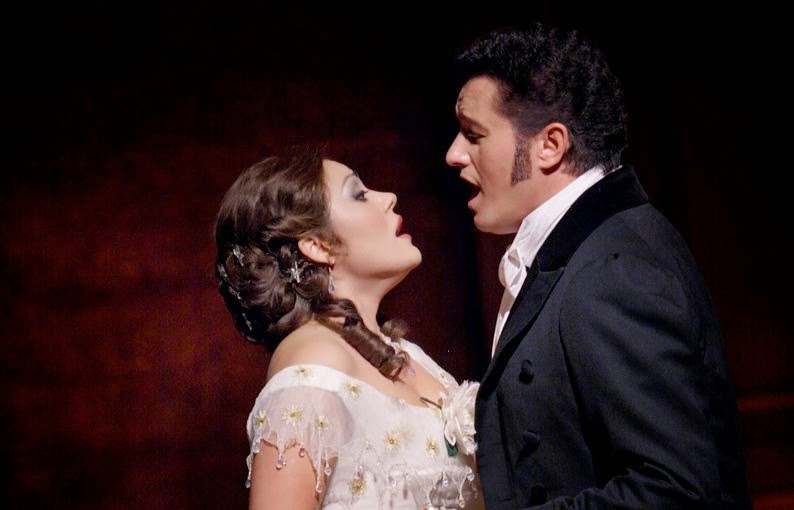 Almost nothing really happens in the plot. Violetta is a professional courtesan on the contemporaneous Paris social scene. Alfredo Germont  and she genuinely, to judge from the music, fall in love. They live together, taking her out of circulation and constraining them financially. Enter Germont the father who convinces Violetta to cut off the  relationship with his son, because of the social consequences not only on the lovers, now ejected from polite society, but on Alfredo's sister's prospects of courtship, thus on the middle-class fortunes of Alfredo's whole family. This is one of Verdi's most convincing confrontations. The sense of the opera depends on it, and the situation is completely plausible in it's hopelessness.

Violetta breaks off with Alfredo; later, they have a public tiff.

Later still, Alfredo visits Violetta dying of the consumption she has been suffering from all along. He has found out she has rejected him only because of his father's demands, and reconciles with her only to witness her death.

Although La Traviata is almost unique amongst Verdi's operas dramaturgically, its music somehow seems more Verdian than ever. In the ethereal prelude, so close, and yet so far, from the Wagner Lohengrin strains that were amazing the opera world at that time, we catch our breath at the sustained rapture suggested by the string harmonies. This is meant to elicit Violetta's fragile beauty and strained, hovering tragedy at the same time. It finally makes sense when we reach the fatal bedroom scene at the end. There is even something for the hit-parade fans with the famous ‘bridisi' drinking song, and the love scenes. But at the core of the musical setting is the long development between Violetta and old Germont: Verdi's home territory is depicting confrontations between plaintiff sopranos and insistent baritones.

This opera was a disaster when it opened in Venice, one of Verdi's rare notable flops, but it was recognized as little as a year later at the second production. It may have been the fault of the singers engaged. It seems the original Violetta was too old and frumpy to make the part believable, and the Baritone had problems, but the provocative subject matter may have contributed to the original audience's reluctance. It had not even been possible at first to stage the opera in a contemporaneous setting. It boggles the mind that the censors, who were for once happy not to have to deal with the usual political 'gaffes' they were used to curtailing in Verdi, still insisted that the time of the action be set in the early 17th Century—away from the present.

We now revel in this work a one of Verdi's serenest and most personal works. The demands of love and family and society, especially when in conflict, always bring out the best in Verdi, but since here all is set in the natural landscape of diurnal normal life, the drama seems more civilized and conventional than is usual with Verdi who is usually so prone to take things over-the-top. Here he proves that none of that is really necessary as long as the central human values ate at the centre of the action.

Michael Doleschell keeps mostly to non-fiction, and is deeply devoted to music and culture and never tires of history, and is fascinated by science and the scientific method [as long as they are well explained]. He broadcasts a program of Classical Music for 3 hours every Saturday afternoon from noon till 3 on the U of G's Radio Station: CFRU.
Posted by Bookshelf Blogs at 4:16 PM