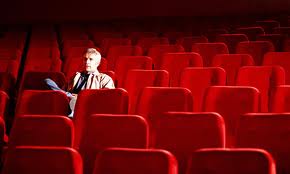 I'm not much of an eater at the movies. I'm there to watch. At my most sensitive, the sound of people eating in front, behind, and to the side of me can be infuriating and completely distracting. I think it might have something to do with the disordered ambiance of a theatre full of munching and crinkling rubbing against the grain of the ordered, intentional experience of the movie itself. But I'd never hiss at someone to quit it with the loud chewing. Food and movies go together like beer and absolutely everything. My tolerance craps out with cellphone glow and unrelated chitchat, but even then it's hard to fault people for being faultful people in what is, essentially, a social setting.

As coddled Westerners, we're becoming cagey, suffering one another--whether foolish or otherwise--less and less. So much of our lives has become about control that we start to unhinge a bit when control over our environment is mostly taken away from us. So we stay home or we wear headphones in public, steering as clear as we can from having to deal with each other. But there's an old fashionedness stained in our cloth. Some part of us still likes cramming together in a dark place to share an experience with strangers, no matter how annoying those strangers are.

There's just score in Samsara, no dialogue. When I saw the movie the other night, the theater was replete with drink sipping, wrapper crinkling, mindless mastication, but also with whispers back and fourth about what was on the screen, or what what was on the screen reminded someone of; there were disjointed little gasps, tsks, and sighs when someone was moved or disgusted or bummed. There was no end to coughs, and sniffles, and shifting in seats, and the theater door opening and closing without a sense of delicacy. With no plot, no talking, the people in the theater were threatening to overwhelm the movie in the theater. For the first half hour or so, I was losing my mind.

But here's the thing: I mentioned in my previous post that, if it's about anything, Samsara's about us. So it makes a kind of perfect, beautiful, maybe unintentional sense that the people you're watching the movie with are contributing to the thing itself. We experience so much of life completely alone nowadays (yes, I said "nowadays") that I think, even when we're surrounded by each other, we try to ignore that fact.

Think about this: when you're watching TV or movies at home, how often do you laugh out loud? Or gasp? I'm going to guess rarely. It's not a coincidence that we laugh more, laugh louder, when we have others around us doing the same. For reasons beyond my ken, shared experiences are elevated, sensitized experiences--for better or worse. Doing a thing in public is as much about being in public as it is about the thing itself. I remember that when the idea of Letterbox Vs. Widescreen became common knowledge, my dad became incensed that he was losing a few inches of detail on either side of the image. When we watch movies or TV alone, I can't help but think we lose peripheral and important elements of the experience, as annoying as some of those elements might be.

Posted by Bookshelf Blogs at 6:04 AM