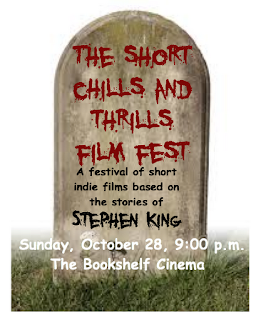 OK folks, here are some brief descriptions of the films Peter Szabo has selected for the Short Chill and Thrills Film Fest screening Sun Oct 28 at 9:00pm. I'm looking forward to the showing and hope to see you there.

While confessing to his priest, a man recalls a life-changing drive with a mute hitchhiker and the dark reflections about his adulterous wife that he revealed to his mysterious passenger. The two confessions--in the church and in the car--connect and lead to a crushing ending. Based on the short story of the same name.

Based on the story "The Man Who Loved Flowers," this colourful short follows Maxwell Edison, a man who loves life, flowers, and women, as he prepares for an exciting date with Joan, while avoiding the shadow of the local serial killer.

Based on the short story of the same name, Grey Matter explores the life of Isaac, who must care for his alcoholic father, a war veteran, after his mother abandons them both. Issac finds release from his troubles at home by acting out in school, mainly by telling lies. Unfortunately, these lies have consequences when Issac's father begins a horrific transformation.

Based on the short story "Nona" by Stephen King, Love Never Dies is a psychological thriller about a drifter who wanders the night, seeking to escape his tormented past. One night he meets the mysterious and seductive Nona, a woman cast from his darkest fantasies, who lures him on a deadly chase to uncover the horrifying truth he so desperately wants to avoid. Inspired by the creepy corners of King’s imagination, Love Never Dies explores the razor-thin line that separates the allure of love from the romance of murder. Love never dies…but sometimes it kills!


See also this contest for the fest:

Posted by Bookshelf Blogs at 8:59 AM